Toxoplasmosis–The Cat Disease that can Blind

Posted at 20:40h in Uncategorized by admin 0 Comments
0 Likes 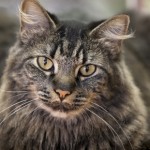 The Cat Disease that can Blind

Toxoplasmosis is caused by a parasite.  It is estimated that 60 million people in the U.S. carry this parasite.  Around 22.5% of Americans have been affected, but some tropical countries have infection rates as high as 95%!  Cats are the definitive host for the disease and when they are actively infected they shed the parasite in their feces for several weeks.  They are the only animal that sheds the parasite.As gross as it sounds, one way animals (including humans) are infected is by eating contaminated cat feces.  The cat litter box is an obvious source, but since all of the great outdoors looks like a litter box to cats, any soil or untreated water could be contaminated.  If you have contaminated soil or water on your hands and handle food placed directly in your mouth then the parasites enter your system and you could become infected.

For individuals with normal immune systems this infection would feel like a case of the flu with fevers and swollen lymph nodes.  The infection would pass after a week or so and life would return to normal.  Even though the active infection will have passed, the individual will often have latent but live cysts dormant in their muscles or other tissues.  Usually these cause no further problems, though some researchers feel that cysts in the brain can affect psychological health.

This same process happens in other warm-blooded animals that have come in contact with infected cat feces.  Suppose a rodent is infected and ends up with latent cysts in its muscles and then a cat eats that rodent.  The cat would become infected and shed cysts in its feces for several weeks.  Other animals would be infected by the cat feces and the cycle would begin all over.

Humans can also become infected by eating raw or poorly cooked meat (especially pork, lamb, and venison) that contains toxoplasmosis cysts in the muscle but they would not shed the parasite like cats.

The infection can also spread congenitally.  If a mother-to-be becomes infected for the first time during pregnancy, she can pass the infection to the fetus.  This can result in still births or significant birth defects.  The eye is a potential site for damage.

Individuals with weak immune systems such as those with AIDs can have a harder time defeating the infection and rather than just flu-like symptoms can have seizures, mental confusion, or blurred vision which represent true medical emergencies.

Most cases of toxoplasmosis are never diagnosed as they just look like a passing cold or flu.  The diagnosis when sought is usually confirmed with a blood test that detects antibodies to the parasite indicating that the body is fighting or has fought the disease in the past.

The infection can scar the retina or nerve.  If the area affected is critical to vision that eye would have poor vision from birth.  If it is not critical to vision, then it would probably be detected later in life during a routine eye exam where the doctor would notice a scar on the retina.  Often live cysts are present at the edges of the scar.  If one of these latent cysts reactivates later in life, the examining doctor would see the old scar with active infection starting at the edge of the scar.  The inflammation in the vitreous (jelly that fills the eye) can be so intense that the scar is barely visible.

Some controversy exists about whom to treat and how much treatment helps since the body often controls the infection on its own, but if the patient has a weakened immune system or the some vital function is threatened like vision, most doctors recommend treatment.  Fortunately, toxoplasmosis is sensitive to a number of drugs.  Usually, more than one drug is used in a combination therapy to increase efficacy.  Pyrimethamine, sulfadiazine, clindamycin, trimethoprim/ sulfamethoxazole, and spiramycin are among the commonly used drugs.  The regimen recommended varies depending on the health of the patient and the stage of pregnancy, if present.

One survey of Uveitis doctors (eye inflammation specialists—amazingly and thankfully there are doctors that actually specialize in inflammation of the eye) found that most specialists also use steroids to decreases the inflammation in severe cases of toxoplasmosis along with the drugs to treat the infection.1  These ranged from oral drugs like prednisone to steroids like dexamethasone injected directly into the eye.2

The infection is prevented by washing food, utensils, cutting boards, and hands with clean water to remove soil and contaminates (Now you know why your mom made such a big deal of it!).  Meat, especially pork, lamb, and venison, needs to be heated to its proper temperature to kill cysts.  Some recommend changing the litter box daily since the parasite needs to sit for a day or so before it matures enough to infect.  Daily litter box changes would ensure it had not sat long enough to mature.  Covering outdoor sand boxes when not in use is helpful.

You can decrease the chance of your cat getting infected by keeping your pet indoors and ensuring that they do not eat uncooked meat.

Special efforts at prevention would be warranted in those pregnant or with weak immune systems.  For example, you could have your doctor insist that someone else in your household change the litter box (finally some silver lining for all your suffering!).I hope this information is helpful.  Please contact me or your local eye doctor if you have further questions.